Well here we were just saying the same thing the other day, and what do we find in this morning’s New York Times but a story saying exactly that: in terms of cool, water bottles are no longer hot. ON a recent family vacation in Cape Cod, Jenny Pollack, 40, a novelist and public relations associate from Brooklyn, did something she knew she would come to regret. She did it on the spur of the moment. She did it because she felt desperate. 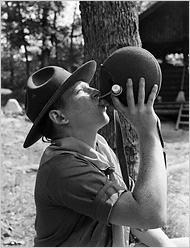 BOTTLED WHAT? To avoid the public guilt, you could always do what the Boy Scouts did in the 1940s.

Besides, the giant illuminated Dasani vending machine was just standing there, like a beacon.

So, with her reusable plastic Nalgene bottles dry and her son Charlie working up a thirst in an indoor playground, she broke down and bought a bottle of water. To most people it would be a simple act of self-refreshment, but to Ms. Pollack it was also a minor offense against the planet — think of all the oil used to package, transport and refrigerate that water.

“Something about it felt like a betrayal,” said Ms. Pollack, who otherwise does not consider herself an ardent environmentalist. She said she decided to stop buying water after hearing friends talk about the impact of America’s bottled water habit. And now she is doing what she can to spread the word.

“I’ve pretty much said to every single one of my friends, ‘Can I tell you my spiel about bottled water?’ ”

How unlikely, that at the peak of a sweltering summer, people on playgrounds, in parks, and on beaches are suddenly wondering if an ice-cold bottle of fresh water might be a bad thing.

In the last few months, bottled water — generally considered a benign, even beneficial, product — has been increasingly portrayed as an environmental villain by city leaders, activist groups and the media. The argument centers not on water, but oil. It takes 1.5 million barrels a year just to make the plastic water bottles Americans use, according to the Earth Policy Institute in Washington, plus countless barrels to transport it from as far as Fiji and refrigerate it.