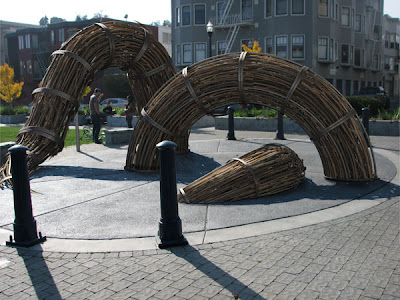 The [BRAF] is proud to support the Hayes Valley Art Coalition in the installation of another public artwork on Patricia’s Green. This site-specific work ‘Adaptations’ by Mark Baugh-Sasaki will be constructed of welded steel and the limbs of trees trimmed and/or fallen in Golden Gate Park.

Patricia’s Green in Hayes Valley, San Francisco, CA, was the location of the Black Rock Arts Foundation’s first Civic Arts project, the Hayes Valley Temple in 2005. The Temple quickly became a beloved centerpiece of the neighborhood and drew people together and connected the community in a new and interactive way.

Since 2005, the Hayes Valley Art Coalition has continued to curate and install temporary artworks on Patricia’s Green.

Please join us for the opening reception for this wonderful new public work!