I’m always on the lookout for stories about Burning Man, and one day an item from Senior Housing News lit up my phone. It was about a group of retirees planning to go to Burning Man for the first time, thanks to a program organized by Juniper Communities, an assisted living organization with facilities in several states.

I tracked down the trip’s organizer, Cindy Longfellow, a cheerful and curious woman in her mid-50s. Cindy had never been to Burning Man but was on point making sure her crew of 15 seniors — four were over 80 — had a safe, fun and memorable time, all while making a bigger statement about the vibrancy and vitality of older people via their camp, Aging Insurrection.

Though they paired up with a more experienced camp, organizers still used common sense when deciding which residents would be best suited for an adventure like this. “We wanted to be inclusive, and yet we couldn’t take someone whose health would be problematic in an extreme environment,” Longfellow said. “A 20-year-old with asthma is not the right person to go to Burning Man, and that’s the same for someone in their 70s and 80s.”

So how did they fare? Longfellow reports back below, and I’d like to throw in a symbolic fist-bump for Best Camp Spirit. If you were lucky enough to stumble upon their Generational Coloring Party, you were immediately enveloped by their generosity, delight and kindness. The setting may have been novel, but the spirit was as strong as ever.

A group of folks involved in the world of senior living first conceived of the idea of doing an anti-ageism camp at Burning Man back in the fall of 2015. Essentially, we felt that ageism was one of the last remaining “-isms” that was still perceived as acceptable and even “okay.” Consider, for instance, greeting cards that make aging seem somehow both funny and depressing at the same time. There has been limited recognition of the positive side of aging. We felt that Burning Man might be an interesting place to explore the theme of anti-ageism.

The 10 Principles of Burning Man truly provided the underpinning for our anti-ageism campaign. Some of the most compelling for us include radical inclusion, radical self-reliance, communal effort, civic responsibility, participation, and immediacy. The Burning Man mission seemed highly consistent with the goal of anti-ageism.

Ultimately our idea came to fruition in Camp Aging Insurrection. We were a camp of nearly 20 that was part of the wider Cla$$y Village of nearly 70 folks and included all ages from the 20s to the 80s. Our oldest camper (pictured here in a hang glider simulator) was 87!

During our planning, we were fortunate to be connected to Camp Kidsville and Mia Quagliarello. Mia was instrumental in the development of our Joining the Generations Coloring Party, which offered opportunities for the community to speak out about anti-ageism and their thoughts on aging in general. The Joining the Generations coloring party included multiple venues for creative expression including a large mural, mandala painting, and wisdom hut fence, where folks were asked to write their thoughts on white ribbons left to flutter in the wind.

We were amazed at the participation and the incredible energy at this event. We had a group of kids from Mia’s camp join us as well as kids from our “neighborhood,” including one little girl who came back almost every day to add a bit more color to the mural!

At the height of the event we had probably 60 or more people in camp — conversing, creating, and sharing in our fun peanut butter and jelly bar. Truly this event was everything we hoped it could be!

Post event, the sharing and creativity continues to resonate. The mandala canvas has been stretched on a frame and will be hung as part of the dedication of a new outdoor deck at a community in Denver which serves folks with behavioral health challenges. The mural is being donated to a senior living community which also has a daycare on-site. And we are transcribing all of the wisdom from the ribbons and plan to pull that together in some fashion so that we can share it with the community beyond Burning Man.

We were thrilled to be part of Burning Man 2016, hope to be worthy bearers of the Burning Man ethos. We will be back bigger and better next year! 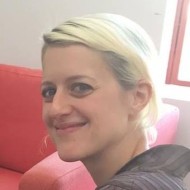 70 Comments on “It Ain’t Nothing But a Number: Camp Aging Insurrection Puts Ageism in Its Place”