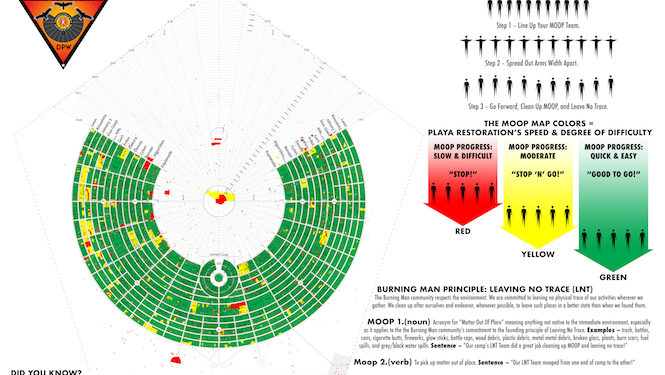 Hello Black Rock City, DA here. Serving as Burning Man’s Playa Restoration Manager since 2005, it is my responsibility to ensure that the Burning Man community leaves the Black Rock Desert environment clean and beautiful and to the best of our ability — without a trace.

Since 1999, as part of our permitting process with the Bureau of Land Management (BLM), Burning Man has been subjected to the annual BLM Post-Event Inspection (PEI). We are proudly the largest Leave No Trace event on public lands, and we have successfully passed this environmental standard every single time.

The Post-Event Inspection has been passed down many times to different BLM agents to oversee and, for the most part, it has been an overwhelmingly positive and collaborative experience. However, in light of the shocking disregard for Burning Man’s 20-year environmental success in BLM’s recent Draft Environmental Impact Statement, it seems like the perfect moment to examine the environmental standards we are held to by BLM and how we hold ourselves accountable as a culture.

The environmental standard for Burning Man is measured in terms of “residual debris” and states that one month after the event, the Burning Man site must not exceed an average of one square foot of debris per acre (1ft2/ac.) during the BLM’s Post-Event Inspection.

If successfully passing BLM’s environmental standard of 1ft2/ac. sounds impossible, that’s because it is — almost.

Translated into percentages, this means that exceeding .002% of debris per acre on average would fail the Burning Man event. That’s basically ZERO PERCENT. Think about that. Another way of looking at it is that Burning Man must score at least a 99.998% cleanliness per acre to pass the final exam. We’re not aware of another event or operation in a National Conservation Area that is held to a similar standard.

For over 20 years, Burning Man has been held to an unprecedented environmental standard, and yet despite this nearly impossible standard, we have never failed. This is a fact. Be proud of yourselves, people of Burning Man. We are undefeated.

In fact, in 2018, with the BLM’s “Environmental Impact Statement” looming, Burning Man was subjected to the Post-Event Inspection TWICE IN ONE DAY (surprise!) — and passed TWICE.

These are achievements that often go unnoticed. Worse still, they have sometimes been misrepresented by the media.

On Christmas Eve 2018, the Reno Gazette-Journal (RGJ) erroneously reported that Burning Man had failed the 2018 BLM inspection. Several similar articles were written in respected news sources before the RGJ finally corrected their own story on April 5, 2019. As of this writing, none of the other publications have published a retraction.

Unfortunately, the damage has already been done and our Leave No Trace record has been besmirched before the general public could even comprehend our monumental victory. It’s a victory that the Burning Man community and the Playa Restoration All-Star Team have fought so hard to accomplish.

In the words of our late founder Larry Harvey, “The Burning Man community respects the environment. We are committed to leaving no physical trace of our activities wherever we gather. We clean up after ourselves and endeavor, whenever possible, to leave such places in a better state than when we found them.”

Our Leaving No Trace principle is just the beginning, one small step toward a sustainable future. Because Burning Man is not a place. Burning Man is a culture, and we are worldwide.

For now, people of Burning Man, here is our environmental accountability in high-resolution, the 2018 MOOP Map. It’s been our game-changing Leave No Trace progress and improvement tool since 2006.

The MOOP map is not a shaming mechanism. It’s a tool to inspire action. This is how we learn, hold ourselves accountable, and improve. This is how we made it this far. It simply would not be possible to clean up over 3,600 acres (or 156 million square feet) of the Black Rock Desert after Burning Man to less than one square foot of debris per acre if it were not for the combined Leave No Trace endeavor of all our people.