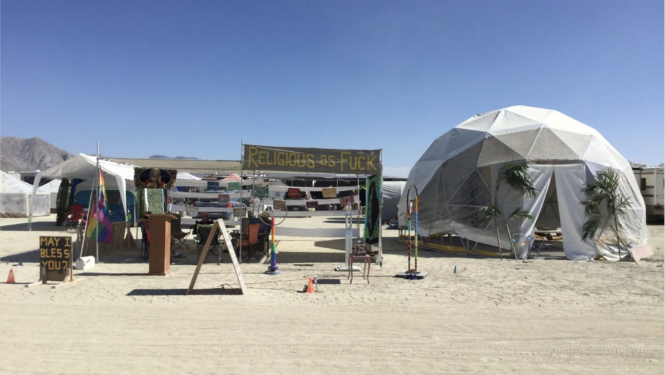 Tales from the Playa
April 13, 2021 By Annie Dunlop and Alex Leach
10 comments

“Most people think it’s a joke when they first meet us,” Annie Dunlop says when describing our theme camp Religious As Fuck (RAF). What we really are is a bunch of (mostly) religious people, some of whom are ordained Christian clergy, and some of whom simply have found Christianity to be helpful in our own spiritual journeys. We are not, however, the scary, out-of-touch zealots you’re worried about polluting Burning Man culture; hopefully having the “f” word in our name helps people realize that we’re different than Christians they may have experienced elsewhere.

From 2011 to 2016, our camp’s four co-founders attended Burning Man independently with other theme camps. The experiences of synchronicities out on the playa connected to their faith so deeply that they were drawn to talk about their Burning Man experiences back in the default world. Their experiences living in other theme camps over the years gave them a solid foundation to start imagining and building an authentically Burning Man Christian theme camp.

But what a challenge! Most people in both the Burning Man and Christian church worlds think of the two as being oil and water, yet we have encountered a lot of people in Black Rock City who are looking for ritual, spiritual healing, honest and authentic dialogue, and prayer. On the other hand, we know that the church could certainly use some Radical Self-expression, Radical Inclusion, and Decommodification.

So we embarked on this adventure to develop a camp that practiced Radical Self-expression around our faith while being true to the 10 Principles. The first challenge was acculturation. A theme camp typically is more than four people, so we had to recruit people from the church world to come build and play with us at ‘That Thing in the Desert.’ That meant that before we ever set foot on the playa, we needed to teach people in the default world what the Burner ethos of Black Rock City is like.

In the months of preparation, we set up teams led by an experienced Burner that were responsible for a specific aspect of the camp: sacred rituals for the public (our gift), kitchen, camp life, and others. In working out those projects, just like on the playa, Burning Man culture seeped in, experience by experience, challenge by challenge.

As with any camp, however, it can be hard to communicate what Black Rock City is like to someone who hasn’t been there before. One campmate from 2018 really struggled with the preparation. She was a priest serving in Northern California, where wildfires were raging and she and her whole congregation had been evacuated several times throughout the summer. It wasn’t even clear if she was going to be able to make it to the Burn. Luckily, she and her community were all back in their homes and the situation was safe enough for her to make the trek out to the playa. Once she was there, she discovered that she didn’t have an adequate tent, and wasn’t prepared for the dust or the cold.

Yet, like a nascent Burner, she took the experience and dove right into it. This is Burning Man! So she didn’t really have good nighttime shelter? Then why not volunteer at Center Camp, serve coffee all night, and meet whoever’s around? She loved the experience of being thrown in with a bunch of insomniac Burners and finding authentic connection in that space.

2018 was Religious As Fuck’s inaugural year as a theme camp. We had nine campers, four services at the Temple (three of them with communion), and hosted seven days of morning prayer from 10-10:30am, and Sacred Space every 2-4pm in camp. We witnessed neighbors develop such a friendship with us that we were able to have honest and healing conversations. We shared ritual and sacrament with people hungry for something sacred. And we supported each other in opening our hearts and minds to what God may be saying to us through our own Burning Man experiences.

In 2018 we had the great fortune of being placed next to a camp that offered “tie me up, tie me down” activities and tarot readings. For some of our campers it was absolutely a dive into Burning Man’s deep end. Our camp leadership knew that it was important for our camp, especially as a bunch of Christians, to not be around a bunch of other spirituality camps. We made that clear in our placement application because we knew that part of our purpose as a camp was to be immersed in the full spectrum of Burner culture. This BDSM camp saw the word fuck in our camp name and immediately saw our camp as a safe space. Our campers even took part in some of their activities.

Our other neighbors that year were an art support camp for a few art pieces in inner playa. They saw our sign and decided to come over and ask us “what the fuck” we were about. Our name truly is one of the best ways to break the ice. It turns out they had a few sober campers who were excited to see our camp bringing a spiritual and non-judgmental attitude to Black Rock City.

We returned again in 2019. By this time word had spread, and we had 70-80 people join us at each of our Temple services. The people who stopped by our daily Morning Prayer services, afternoon conversation time, and contemplative services were eager to engage about their spiritual lives. We expanded and invested in developing a chapel dome at our camp that felt like an authentic representation of Christian Burners.

Ultimately, we simply see ourselves as Radically Self-expressing while also practicing Decommodification. And no, this isn’t an advertisement for church. When we serve people at Religious AF, we are there to welcome them, serve them, pray with them, and answer their questions. We are not there to show them how cool Jesus or the church is. We aren’t recruiting them, or asking them to join anything. We practice Radical Inclusion, conversation, prayer, and ritual to all who seek it: gay, trans, straight, high, sober, clothed, naked, polyamorous, monogamous, celibate, gracious, and grumpy alike. We have welcomed people in all of those categories (and more) because we are also those people. We want to participate and co-create experiences of Immediacy that open hearts and connect us with the Divine source of all that is.

After all, isn’t that what Burning Man is all about?

About the author: Annie Dunlop and Alex Leach Annie Dunlop (aka Entheos) made her first trip to Black Rock City in 2014, and she has attended every year since. In 2016 and 2017, she was one of the leaders of Reverbia, and has been a part of the large-scale art installations “The Journey” (2017) and “The Folly” (2019). In 2018 Annie was one of the founding members of Religious As Fuck (RAF), a group of Radically Inclusive Christian Burners, which includes members ranging in age from their 30s to their 60s. Many of RAF’s campers identify with the queer community, including Annie. Alex Leach (aka Gummy Bear) is an Episcopalian Priest, a dad, and a Burner. He was a co-founder of the theme camp Religious as Fuck (RAF) in 2018, and has been a Burner since 2011. Alex’s experience of living in theme camps in Black Rock City has radically transformed and deepened his experience of Spirit, Sacredness, and God.He now participates with his campmates in RAF to build a space combining authentic Christianity and Burner ethos.

10 Comments on “Stories From the City: Religious As F*ck — Sharing Sacred Rituals on the Playa”