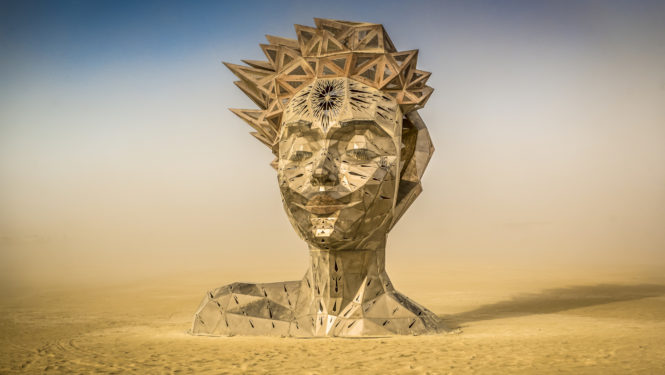 Tales from the Playa
September 22, 2022 By Caveat Magister
15 comments

My first several days on the playa did not feel like Burning Man to me. It felt strange and unfamiliar. I was looking for big, showy moments of overwhelming magic. When Burning Man began to happen to me, it happened in quieter moments, almost private.

These are the first few moments when I realized: yes, I’m here, it’s happening, we’re at Burning Man.

Friday, the day before Gate opens:

I was sitting in the lounge area of a camp that I have often visited over the years, and a young woman came in dressed as a very old woman — wig, make-up — and playing the role of “Gertrude,” a widow who had begun rediscovering herself after her husband died. Burning Man had always been a bucket list item for her, and now that she was having an awakening she’d come to Black Rock City and wanted to live her life to the absolute fullest for the four to eight days her doctors say she has left. (Her life is cut short, sadly, because of all the venereal diseases she picked up at the old folks home once she found herself again).

This was funny, and she was wholly committed to the bit, so I bantered with her about it for a while, and eventually she went away to “take a nap.” She came back later out of costume and character and sat down next to me and introduced herself.

She gave me a look, “I think we’ve met before.”

“We could have. I’m afraid I don’t remember.”

“Yeah, it’s been my home away from home for a while.”

It’s possible? I suppose? “Okay,” I said. These are always embarrassing moments.

“Do you,” she asked, “remember calling me a delusional optimist?”

She gave me a piercing look: “I think you did. The night we met. Here, at my first Burn.”

Actually, literally everyone I’ve since told this story to has said, “Yep, that sounds like you.”

She nodded. Definitively. She was sure. “It was you. You told me I was a delusional optimist. I don’t remember much about that burn, but I do remember that. And it stayed with me ever since. I’ve actually written a book about my life I want to publish some day, and that’s part of my book: that some guy at Burning Man called me a delusional optimist, and it stuck with me. And I’m still a delusional optimist, I’m just more jaded now. And now here you are. I’d like to pick that up where we left off.”

That was the first moment this year when I knew, deep in my bones: yes, this really is Burning Man.

I went to the party at the Gate, where people celebrate the official opening of Black Rock City to all ticket holders. There are mutant vehicles, some of which have stages, and some of which have flame poofers, and people walk along the outskirts of the Gate road and mingle and watch the cars waiting to come in. At midnight, when it formally opens and the line can come in, there are fireworks.

“Adrienne” was there, along with her stepson “Tommy.”  Tommy is six. A well-meaning relative stranger had given Tommy a caffeine drink earlier in the day, so he was wound up and full of energy. He was holding Adrienne’s hand and running in circles around her, over and over again, so that she had to spin, too. People made jokes about his being in orbit.

“This is my life now,” she said, still spinning.

She shrugged. “Knock yourself out.”

So I started running around Adrienne too, at a farther distance. And before I’d made two complete circles I looked around me and realized that now everybody in this crowd was now orbiting Adrienne, making a whole solar system. We were all dashing around at various distances, a spontaneous celestial body of people in the dust. And it was giddy and silly and Tommy couldn’t stop laughing.

And just like that, the whole solar system flew off in every direction, dispersing.

A moment later it was midnight, and a massive fireball exploded 60 feet away from us to announce the opening of the Gate. We gaped as a cheer rang out from all around us.

Tommy walked up to Adrienne and held something out in his hand — one of his baby teeth had fallen out.

Since it had fallen out at Burning Man, his parents would later decide the Tooth Fairy would leave a piece of art, not money, under his pillow.

I honestly don’t remember exactly when this happened. Maybe Monday of event week?

Late at night, back at camp, we were sitting around a burn barrel, drinking and singing. I’d been struggling a lot that day, and was carrying a lot of anger and worry around with me: am I up to doing it all again this year? Can I live up to my past self? This was affecting my song choices, and so I was leading a lot of songs about death and loss.

The camp kitchen had an oven, and someone had baked a batch of fresh cookies that night, which we had out on a platter, and as people walked by I would interrupt my songs of death and loss to make sure they knew they could have a cookie. It went something like this:

“And the long road will ease my pain … FRESH BAKED COOKIES!

“No gem of womankind will make me … SIT BY OUR FIRE AND HAVE A FRESH BAKED COOKIE!

Sometimes people stopped and joined us, and usually they had a cookie. But after a while an older couple, a man and a woman, sat down but turned the cookies away. They’d been passing by and heard the singing and asked if they could stop and be part of it for a while. Of course they could.

I kept right on going with my depressing songs that had choruses where everyone can sing along. I sang “St. James Infirmary,” about a dead lover. I sang “Irene Goodnight,” about loss and a broken family. I sang “Rambling Boy,” about a childhood friend who died while traveling.

After a while, the couple got up and said they’d be moving on. The woman leaned down to where I was sitting, gave me a hug, and whispered in my ear so that this was a moment just for the two of us:

“Thank you so much for this. We lost our son four years ago, and we’re going to put him in the Temple tomorrow.”

They walked away into the darkness.

“What are we singing next, Caveat?” someone asked. And I didn’t know — the spell of my dark and terrible mood had been broken.

Cover image of “Seed of Dreams” by Martin Taylor and the Chromaforms Art Collective, 2022 (Photo by Leori Gill)