I recently sat down with first-time Burners Kartik Vasan and Smriti Bhadauria, a husband and wife from India. They were gracious enough to share their experience—in words and photos—from Black Rock City 2022. 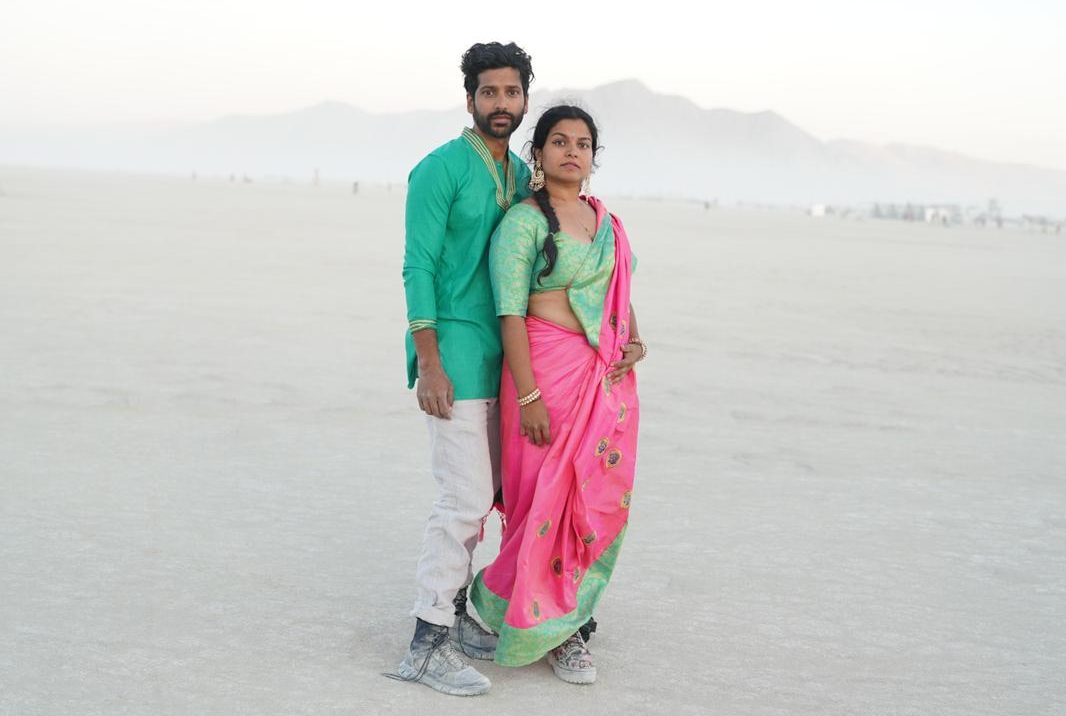 Tell us about your journey getting to the Black Rock Desert—what made you decide to go for the first time this year, and what was that process like for you?

Smriti: Oh, man. The first Burn was so much more than what we could have ever expected. It’s been a really, really, really long-time dream of ours to make it to the Burn; we just never got lucky with tickets. But this year, things were ‘meant to be’ for us.

We were on a ferry in Nicaragua, with the spottiest network ever, sitting in the virtual lineup for tickets. We honestly had zero hopes of getting in. Then, suddenly, the screen was like, “Oh! You are in for tickets, just make your payment.”

We couldn’t believe it because 35 of us from our camp were trying to get tickets and only the two of us, on a ferry in the middle of nowhere, hot-spotting on our laptop, got tickets! So we were like, “Okay, this is a sign. This is our year.”

How was it when you finally arrived on playa—were you feeling nervous, excited, overwhelmed…?

We didn’t have our van or an RV or anything like that for our first Burn this year, we just did the tent thing. Thankfully there are so many resources on the Burning Man website—what to pack, what not to pack. It was overwhelming, to be honest, the packing process. We had spreadsheets and spreadsheets—we need water, we need this, we need that. All those checklists really help you.

You’ve seen so many pictures of Black Rock City, but still nothing comes close to just being there. It literally blows your mind. We knew it was going to be overwhelming for us, so we kind of prepared for it. The first two or three days we’d planned to not do too much—just soak it all in, understand how the camps work, understand how the community is out there. Then we started exploring the playa. How did you decide what to pack, and what resources did you find useful when you were planning what to bring to the Black Rock Desert?

(Smriti smiles.) We were in our planning stage of outfits for a while. The ONE question I had in mind for the entire prep of my first Burning Man experience was what exactly is a Burner outfit? My husband was able to find a lot of—I don’t even know how to say it exactly, but—“Burn clothes,” I guess?

I was not at all comfortable with what I was finding; None of the outfits I was seeing felt like a way for me to radically express myself at Burning Man. I was very unsure of how I was gonna be myself and what I’d be wearing.

Then suddenly, while we were at my aunt’s house, I was just browsing her closet and it hit me: “Wait a second! Is there anything more colorful than Indian sarees? And is there anything more wild than a saree? What’s more expressive than being loud and proud of my culture and bringing representation to a space that predominantly feels very white?” So I just picked out the most vibrant colors from my aunt’s closet and picked out some crop tops, too. I was like, “You know what? This is going to be my Burn!” Instantly I felt this sheer excitement and connection to the Burn, once I was able to make that decision to rock a saree at Burning Man. After that, everything was just magical.

“I was going to be this vibrant version of myself that I was not able to find in Black Rock City otherwise; that little decision really made the experience so much more powerful for me.”

The Burn is so much about self expression, but I didn’t know what my expression was—right up until I decided to embrace my culture and my roots and my traditional outfit. The thing with sarees is: it’s just a piece of fabric, so it’s such a body positive outfit. Anyone can drape it, no matter what your size is—how big you are, how small you are— and it just looks feminine on you. It looks perfect, no matter how you wear it, how you drape it, it makes a statement.

I also picked up some jewelry with it. There are these long-hair accessories from this classical Indian dancing called Jadai Billai, which my niece does. She wears them in her hair whenever she performs. I asked her if I could borrow some for Burning Man. So in some of our photos and videos, I’m wearing a long braid with these little golden pieces throughout the braid that are actually part of the dance form called Bharatnatyam.

Where did you find the inspiration and courage to wear your saree, since it was something you hadn’t seen or heard about others wearing previously?

When we started our van life journey, we were literally one of the first brown people to do it. So I think somewhere during this journey, we discovered that we have to own who we are and we have to celebrate who we are. It’s the same essence we felt with Burning Man: we are outnumbered and we are limited; we have differences, we are all different people, but that’s fine. We have to own it and celebrate it.

Overall the overwhelming support that we continue to get from our van life community and from the social media community—what it means to them—every time we own who we are and celebrate it… It’s amazing how powerful and impactful that is.

To then witness the response I got on playa from Burners, it was exactly what I needed to feel like a part of the community at my first Burn. I’ve talked to a lot of people who said they didn’t have the courage to do what I did.

“So many brown girls have been pleasantly shocked to see me ride my bike in a saree around the playa, I think they’ve realized they can do it too.”

Do you feel like you saw more or less diverse representation than you expected in Black Rock City?

To be honest, once I was there, I felt a little out of place because I just didn’t see many brown people out there. But once we started exploring, I was surprised.

As soon as I went out cycling wearing my saree, there were brown girls running towards me—just coming up and hugging me. There was one brown girl who was dressed as a cupcake, and she hugged me really really tight. She just kept saying, “Thank you, thank you, thank you for doing this!” I was like, “For doing what?” And she said, “You have no idea how many years I’ve been dreaming of wearing my saree at the Burn.” I guess it was her fifth or sixth Burn. “But I just never had the courage. I never thought I could pull it off. Until I saw you and I was like this is it. Next year I have to bring my saree!”

After that, I had so many of those moments where random people—from India or from South Asia—would just come up to me and be so proud and so happy to see that I did this. That’s when I realized that there were actually a lot of brown people, they were just not prominent or they were hidden or they were just trying so hard to blend in that I could never really make them out. But I was able to make a little community out there and connect with people—I was like, “Hey, maybe we should do a Bollywood Club next time, like a theme camp.” Everyone got so excited with that idea.

Honestly, you may feel a lack of representation at your first Burn, but things are changing. There were a lot more BIPOC folks than I had expected. There was Black Burner Project; we got to attend a diversity talk hosted by PlayAlchemist, where Monica Dogra played music; and we even bumped into our favorite Indian actor, Abhay Deol.

Can you tell us about the epic dinner you hosted in your camp?

Our camp is very supportive and small—we have a group of about 35 people. It’s called Never Never Camp. One of our very close friends Josiah was the one who started it, and they have assigned dinner nights.

I knew I wanted to do an Indian dinner, which is very elaborate. I was committed to it. So we packed all the spices, all the ingredients. I had made the curry paste right before—maybe an hour before—hitting the road. We packed up all of our ice coolers.

I decided that since everyone would be beat that first night, I was gonna do a fabulous Indian dinner the second night. I went all out—I made two, three dishes. I made a vegan version of a curry, then a chicken version, and a regular vegetarian version. I also did a very elaborate Indian dessert, plus naan bread and rice and everything. I even brought a box full of Indian snacks just for everyone to munch on all week. It was amazing to feed people food from my country, and in the middle of Black Rock City where there’s so much love and warmth.

“Being comfortable in your own dusty skin and clothes is a huge part of this community. It was beautiful to see everyone welcome our culture and roots when we wore our desi outfits and shared our Indian cuisine. We cooked up an entire Indian feast for our camp of 35 members and served pani puri on playa.” Have you started making plans yet to attend Burning Man again, and what will that look like?

I really wanna do a Bollywood night where we just play a lot of Bollywood music and dress up. In 2023 we are also planning to do a bike ride out in sarees, because one of the biggest concerns everyone had was: How will you ride a bike in a saree? It’ll be impossible to ride a bike. But I figured it out this year; so next year a bunch of girls in my camp and other girls have said they already want to participate. Hopefully we’ll build a bigger community once we come back next year.

We definitely decided this year that this is going to be a lifelong relationship. It’s not gonna be just one Burn for us. We’ll come back as long as possible. So you’ll definitely see some Bollywood-related events in next year’s roster.

“Overall, Burning Man made us open our hearts in ways we didn’t know were possible. #ThanksLarry” You can follow more of Smriti and Kartik’s beautiful journey as they travel the world—with their dog Everest—in their renovated 1977 Dodge B200 Tradesman campervan.

About the author: Brinkley Kristy Neufeld, aka Brinkley, is the Managing Editor for Burning Man Project. She oversees the Communications team’s various public-facing channels, and can be found at Media Mecca on playa. A self-proclaimed word nerd with a creative soul, Brinkley's first year experiencing the joy of 'dust in all the wrong places' was 2019. She currently spends her free-time on the road between California and Colorado, CrossFitting or adventuring in the great outdoors with her dogs—Winnie & Joon—while living in a van called 'Ronda.'

11 Comments on “Rocking a Saree at Burning Man”