“The more digital we get, the more ritual we need,” Burning Man Project board member Chip Conley likes to say. But why is ritual so important in our increasingly technology-driven age?

As far as rituals go at Burning Man, every year most attention is directed towards two rituals in Black Rock City: the release of the Man and the Temple burn. With centerpiece prestige and symbolic importance, these two rituals often garner the lion’s share of attention from the smaller, albeit no less special, rituals delivered at the final resting place of the Man.

These smaller experiences bridge the sacred and the civil, and they offer opportunities for those who weren’t in the Great Circle to contribute something to the ceremony. Whether historical or brand new, the customs and traditions people gift on playa are an enriching part of Burning Man culture that extend the ceremony and add to its meaning. They are also a means to heal and nourish the body.

Finding Artifacts in the Ashes of the Man

The artifact-gathering ritual can be traced back to 1995 when Burning Man co-founder Crimson Rose returned to the Man burn site to collect keepsakes. She tucked bits of decomposing granite from the base and some scraps of wood screws, nails and ash into a jar, and has been returning each year since.

“I felt compelled to go on this archaeological dig. I was particularly struck by the neon that had melted to take on an anamorphic design,” she says.

For Crimson and many others, these relics have become a visceral connection with Burner history. In the Nevada Museum of Art, there’s now an exhibit containing 19 jars that she has collected from the site of the Man.

“For as far back as I can remember, there has been a draw to gather to be next to the fire,” says Crimson. “Once the ground is cool enough and the perimeter is released, I’ve seen people cooking bacon and potatoes in it, or curling up with friends too.”

Today, some collect at the Man burn site in search of other keepsakes or mementos. Many folks do it without realizing how popular it is, and later the relics resurface as necklaces, rings and other charms. In other words, the flesh of the Man becomes nourishment for the arts.

The Jazz Funeral by the Black Rock French Quarter

Many know the Black Rock French Quarter for its annual Mardi Gras celebration on the Esplanade, but when creole camp figurehead, Lucifer, wanted to do something to honor the passing of the Man, he knew a New Orleanian Jazz Funeral would be just what the doctor ordered. The funeral marches out in jovial procession to the ashes of the Man for a moment of commemorative jubilee.

“The Jazz Funeral is one of the most iconic aspects of New Orleanian culture,” says Lucifer. “The beauty of a jazz funeral is that it mixes the melancholy with the celebratory.”

Where the Temple has long been a source of healing, the release of the Man is symbolic and requires contemplation. By joining New Orleanian culture with Burning Man culture, the Black Rock French Quarter’s Jazz Funeral is a culturally enriching ritual that is both a unique gift on the playa and one heck of a parade.

The White Procession of Loveland Village

In their annual White Procession, the good folks at Loveland join together on Saturday at sunrise to deliver mementos to the Temple. Dragonfly, Ray Phoenix, Durian Songbird and Jenny Bee discovered they had been independently doing some form of this ritual over the last five years, and so they decided to offer it to their camp as a collective intention-setting ceremony.

It’s a two-part ritual. First, camp heroine Jenny Bee leads a group discussion at the beginning of the week, where each participant uses to voice their intentions for the week and to place an item at the camp’s Love Altar. In the morning after the Man burn, the group visits the Temple to deliver all the items while they reflect on the intention they set earlier.

It’s proven to be a remarkably potent ritual because according to Jenny Bee “it grounds us personally and bonds us as a tribe, while framing the experience of Burning Man for each of us… to give it meaning”.

Inspired by a long-time friend, who is a farmer, Zig Zag and Flip cook up a lamb and pig each year on the flaming remains of the Man. Together, the two form the leadership of a crew called Hot Ass Man Meat (a.k.a. HAMM), a band of rugged misfits serving fine cuisine.

The process takes hours and results in a number of culinary delicacies that, by dawn, are a godsend to weary travelers all over the esplanade. From ribs and legs to hearts and testicles, the entire animals are cooked and consumed. The crew also makes a savory stew and cooks up eggs on a griddle alongside the animals.

While the animals are carved and served, the heads are curiously left completely intact. The sheep even have their fur.

“We wanted our friends to know where their meat came from,” Zig Zag explains. “We wanted to teach people, but we also wanted to feed people who are hungry.”

Adding to the lore of the ritual, a few people initially prepare the food and then the ranks of HAMM grow throughout the night. “It’s a growing ritual that picks up people along the way, with some that stay and help for more than five hours at a time,” says Flip.

Whether for sustenance or ceremony, the gift dished out by the team at Hot Ass Man Meat is both hearty and wholesome to the body and the soul.

Will Roger Peterson and Tony Perez started the Golden Spike ritual, which initiates the DPW surveying that eventually becomes Black Rock City. The spike represents the schematic cornerstone of the metropolis and a reference point by which all other placements are set on the playa.

In the opening ceremony, each DPW member strikes the Golden Spike and signs the “cocktagon”, which represents the tip. After the Man burns, his remains removed and the ground has cooled down, the Golden Spike is retrieved.

“It’s interesting because it’s something that originated as quite utilitarian in purpose [for the leadership in the DPW],” says Crimson, “but through tradition has become something that they get a lot of pride in commemorating together.”

Let us know which post-Man burn rituals you enjoy each year. 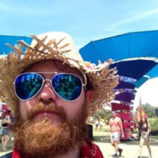 7 Comments on “The Post-Burn Rituals of Burning Man”