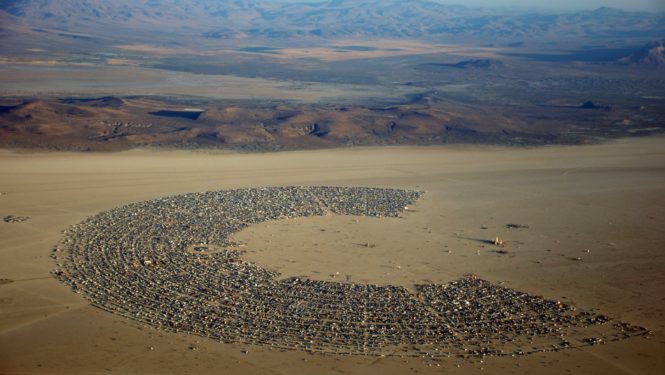 The future of Black Rock City is at risk, and we need your support. The Bureau of Land Management has recommended untenable changes to our permit. The changes do not factor in our 28-year operational track record and commitment to environmental protection. Other changes rely on improbable or impossible conditions and many more lack sufficient data. Some of BLM’s proposals are in direct conflict with our community’s core principles and would forever negatively change the fabric of the Burning Man event, if not outright kill it.

Burning Man Project is seeking a 10-year permit from the Bureau of Land Management (BLM) to continue holding the Burning Man event in the Black Rock Desert of Northern Nevada, our home for the past 29 years. As part of that multi-year effort, BLM published the Draft Environmental Impact Statement for the Burning Man Event on March 15. Burning Man Project staff have completed a preliminary review of the 372-page Draft EIS, 11 technical reports, and problematic changes to our permit.

For the past 30 years, the Burning Man organization has worked collaboratively with the Bureau of Land Management and other agencies, the public, and event participants to be an exemplary steward of public lands, and to produce a safe and fun experience. We have strived to protect the cultural integrity of the Event while safely adapting to changing expectations and increasingly aggressive regulatory requirements. We are held to the highest standard of any permit on BLM managed lands and are proud of our environmental track record. Burning Man is now the largest Leave No Trace event in the world. Black Rock City has also become a significant economic engine, bringing $70 million into the Northern Nevada economy each year.

While we are disappointed with the Draft EIS, we remain committed to working with BLM, the Department of the Interior, and members of the public, to address the substantial deficiencies it contains. That’s where you come in.

This is a call to action. We are asking our community to help shape the future of Burning Man and Black Rock City. Members of the public have 45 days to submit feedback while the Draft EIS is under consideration. The deadline is April 29. Public input is extremely important and will affect the Final EIS, due out later this summer. Instructions for how you can share your constructive thoughts and concerns are included below. We have serious concerns with Volumes 1 and 2 of the Draft EIS, and with the Special Studies. We’re counting on you to help identify errors or overlooked information and convey them to BLM.

Before you submit a comment, read our Commenting Guidelines, and for more information about the permit mitigations, go here.

While we have serious concerns throughout the DEIS, among our most serious concerns are several mitigations proposed by BLM in Appendix E of Volume 2 that would result in the federal government replacing, overseeing, or managing areas of Black Rock City’s operations that have been successfully built and managed for decades with expert, dedicated staff and thousands of volunteers.

One particularly brazen recommendation would require Burning Man Project to pay for maintenance of County Road 34, which leads to the event’s entrance. We know of no other instance in the United States where a private entity is required by the federal government to pay for maintenance of a public county road that is also used year-round by residents, tourists, and businesses. In addition, Nevada and Washoe County include a gas tax allocated in part for road repair (which participants have contributed to for 29 years). More importantly, Burning Man Project is already working closely in collaboration with Washoe County to find a more permanent solution for CR34.

Other serious problems with the Draft EIS include BLM recommending nearly 10 miles of K-rail or Jersey barriers installed around the Black Rock City perimeter fence; dumpsters placed in the city and along Gate Road for 80,000 people to deposit their trash, despite our Leave No Trace ethos and track record; and that Burning Man Project contract and pay for a BLM-approved private security company reporting to BLM, to screen for weapons and drugs in all vehicles, and to search participants, vendors, contractors, staff, and volunteers at all points of entry to Black Rock City.

Our review also indicates BLM’s proposed mitigations are inconsistent with recent orders issued by the Department of the Interior intended to reduce burdens on those who operate on public lands. Instead, this Draft EIS would drastically affect our capacity to do our job hosting the event, and increase requirements for Burning Man’s special recreation permit. Public recreation is a keystone use of federally managed lands, and in fact the Black Rock Desert-High Rock Canyon Emigrant Trails National Conservation Area was established by an act of Congress in 2000 in part to conserve, protect, and enhance the recreational values and resources associated with the Applegate-Lassen and Nobles Trails corridors and surrounding areas — large-scale events such as ours are specifically allowed in that legislation. We are gathering within our rights on land that belongs to the people, with an outstanding 28-year record of environmental stewardship and inter-agency collaboration.

Burning Man’s latest cost estimates for BLM’s recommended “mitigations” and “monitoring” would amount to nearly $20 million per year, which would cause ticket prices to increase by approximately $286 per person and severely impact the Burning Man organization. Notably, BLM would benefit financially from these increased expenses through their existing requirements to take a percentage of a permit holder’s gross revenue.

Beyond the required measures, BLM has attempted to unilaterally change Burning Man Project’s permit application, extending the event’s duration from 8 days to 9.5, without consulting or notifying us — again, resulting in increased event costs.

Also, the analysis, tone and tenor of the mitigations indicate the BLM has completely disregarded the extensive environmental and public safety measures we already implement every year, including two post-event weeks of intensive roadside restoration through public and tribal lands.

While we have no immediate plans to significantly change the annual population of Black Rock City, the Draft EIS explores a number of possible population scenarios, including growing or shrinking the event, so that we may better understand our impacts under different conditions.

If you feel strongly that concrete or plastic barriers at the fence line would impact your experience at the Burning Man event, that Leaving No Trace is an important principle for you and the culture to continue to embody, or that new search and seizure operations by BLM’s private security company would be problematic, leading to increased wait times, traffic, and civil rights violations, we strongly encourage you to formally submit a comment to BLM.

If you fundamentally oppose this draconian response by the BLM to a peaceful, responsible, recreational steward of public lands, then join the community and respond.

Public input plays a critical role in shaping the Final EIS and our experiences in Black Rock City.

We encourage all interested parties — especially participants, business owners and civic leaders — to submit comments and attend two upcoming public meetings in Nevada: April 8 in Reno and April 9 in Lovelock (see details below). We will be there and would greatly appreciate your presence and participation. Let us know you’re coming by emailing eis@burningman.org.

BLM has requested public comment and we encourage everyone to review the Draft EIS and submit informed, substantive comments through the BLM’s comment form or by emailing blm_nv_burningmaneis@blm.gov (be sure to copy us at eis@burningman.org). If you are unable to comment online you can mail comments to: Attn: Mark Hall, Bureau of Land Management, 5100 E Winnemucca Blvd, Winnemucca, NV 89445. You may submit multiple comments on different issues or include many issues in a single comment. More details are on the BLM website. The deadline for public comment is April 29.

If you’re a subject matter expert in any of the resource areas in the Draft EIS, contact us at eis@burningman.org.

Members of the public may also call BLM Authorized Officer Mark Hall at the Winnemucca District Office of the Bureau of Land Management with questions or concerns, (775) 623-1500.

Thank you for your time. Again: before you start, read our Commenting Guidelines, and for a detailed analysis of these egregious and at times arbitrary and capricious permit mitigations, go here.

Top photo by Will Roger Peterson