This is the first installment in a Journal series that will explore the ins and outs and random asides of this year’s Burning Man theme, Waking Dreams: past, present and future visions of our hypnagogic reality.

You may already be familiar with Jason Silva from his appearance on the Burning Man LIVE podcast. Or from his tenure as host of National Geographic’s Brain Games. This amazing philosophical rant, The Human Condition, was recorded in Black Rock City 2019, and then enhanced via AI to add kaleidoscopic art visuals. The resulting video is thought-provoking and extraordinarily trippy – and a great way to kick off a season of thinking about the power of dreams to recreate our world. 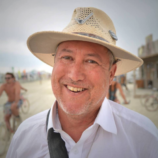