You can’t document Burning Man. Most who try hit the potholes of confirmation bias or fascination with shiny objects. In photographers’ terms, most look at Burning Man with a shallow depth of field. The main subject is in focus, but the background is oddly blurry.

That being said, John Curley is one of the rare few who has brought those blurry, sometimes shadowy, figures into focus since 2008. His combination of words and photos have brought depth to this dusty place. This year, he can’t fully continue what he does best because his brain and the left side of his body aren’t communicating well.

John suffered a stroke the morning of January 10, 2022, while in Nayarit, Mexico. Understandably, the details are fuzzy to him, but his partner Erica Bartel explains that he spent three weeks in a Mexican hospital and was then moved to San Francisco, California. There he spent a month in acute rehab before being released March 4.

Though in a wheelchair, John began his rewiring project by coming to the Burning Man Golden Spike ceremony on August 3, 2022. He made a couple of other pre-event visits before he and Erica anchored their silver Airstream—its playa name is Curley Town—in Media Mecca camp a week ago. John Curley’s cane leg in the playa dust, 2022 (Photo by the author) John Curley and Erica Bartel at camp in Media Mecca, 2022 (Photo by Kristy Neufeld, aka Brinkley)

The fancy term for body rewiring is “neural plasticity.” John explains the concept: “If you place yourself in the middle of familiar things, your brain can find new routes around destroyed pathways lost due to a stroke.” Burning Man is full of familiar things.

John’s first Burn was back in 2008. He came to document the building of the Center Camp Café, and Andie Grace asked if he would like to write a blog. “This was before everyone had a phone and a camera in their pocket,” he recalls. A guy with a camera was not always appreciated. It took years to build a rapport with all the departments that put Burning Man together on the playa.

“There is a poignancy to being back in a place where I can’t do the things I used to do,” John says while seated in a wheelchair. “I miss not being able to walk up to people and draw them out of themselves. Sometimes it was the Temple build crew or people living in the Department of Public Works (DPW) ‘ghetto.’ I was able to separate a few of the sheep from the herd and bring their stories forward.”

“When I was living in New York, reading John’s stories was always part of my preparation for the playa over the first few years I came to Black Rock City,” Dominique Debucquoy-Dodley recalls. “His posts helped me connect with Burning Man even though I was living thousands of miles away.” Now the Associate Director of Communications for Burning Man Project, Dom finally met John in person for the first time in 2017.

“This year,” John says—somewhat in jest, “First, I want to get out of here alive. Beyond that, I hope I can gain a few more steps on my own and a heightened sense of balance. I look at this year as a form of therapy to reclaim some of my neural pathways.”

If you search John Curley’s name on the Journal you’ll find a large flock of interesting sheep he has brought forward in photos and words over the years. In real life, he can be found in “Curleytown” at Media Mecca.

Cover image of John Curley on playa, 2022 (Photo by the author)

About the author: Dennis Hinkamp a.k.a. Flackmaster 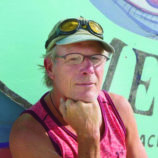 Dennis Hinkamp lives in Logan, UT. His playa name is Flackmaster, though he is using it less frequently. He would like to be remembered mostly for the conceptual art project Twinkie Henge and the many elegant iterations of Media Mecca.

5 Comments on “John Curley: “This Year, I’m Rewiring Myself””