It’s been three years since Burning Man Project announced a new physical Temple, so we are extremely excited to kick off the new year by presenting Temple of the Heart by Ela Madej with Co-lead, Reed Finlay.

Selecting the Temple for Black Rock City is a uniquely challenging decision. We look for a design with a strong visual impact that can serve as a meaningful space to hold the full range of our community’s experiences and offerings.

There are both conceptual and practical considerations. Is the Temple creative and beautiful enough to be an artwork in and of itself, but simple enough that it doesn’t get in the way or dictate an experience? Will it burn well, and safely? Have the applicants planned for LNT, and considered sustainability in their design and execution?

The lead artists are also a key consideration in the decision-making process. Because the Temple is such an important and meaningful space, we need to be sure we select someone motivated by the right reasons.

With all this in mind, we are delighted to have selected Temple of the Heart! Design-wise, we appreciate that it will be relatively modest in scale. The space allows for many offerings from the community without pushing to be bigger than ever — a key consideration as we balance tradition and environmental sustainability.

We always look for a design that allows unskilled volunteers to make meaningful creative contributions. Temple of the Heart’s central altar will allow for people without build experience to participate in a significant way.

The selection committee is thrilled to have a woman as the Lead Artist for this year’s Temple. The feminine aesthetic and exquisite floral motifs found throughout the structure will be beautiful elements, both up close and from across the playa, day and night. Ela and Reed are putting their own hearts and impressive skills into this aptly-named Temple.

We hope you are as inspired as we are by our 2023 Temple!

Temple of the Heart is designed to look like an upside-down desert flower with a stem reaching up into the sky, serving as both a beacon as well as a sundial. It creates a feeling of being near a heart, wrapped in love for those who seek solace and respite. At night it will glow with soft, warm, welcoming light.

The structure is based on a 12-star base; the central gathering space is the Heart Chamber. Traditional floral lace patterns from Eastern Europe — inspired by Ela’s Polish heritage — will be used on the ceiling panels.

The center of the Heart Chamber features the Rose Altar, a prominent decorative element that will be back-lit to emit a soft glow. It will include approximately 100 large and medium-sized roses and hundreds of smaller flowers created by Temple volunteers and community members. The Altar is situated on a star-shaped elevation that connects all the way up to an external spire that represents the stem, sending the energy of the space upwards.

Hugging the Heart Chamber is a walled-off Outer Ring with an additional 12 alcoves with built-in seating. This space will inspire walking reflection and satisfy a need for movement, so the Heart Chamber can hold space for stillness.

The four entrances are surrounded by an ornamental fence with corresponding gates to create a courtyard surrounding the main structure. Each gate will be crowned with additional wooden roses.

Ela Madej (whose playa name is “Light”) is the Lead Artist behind Temple of the Heart. Originally from Kraków, Poland, she moved to the US in her mid-twenties and now lives in San Francisco. Her first Burn was in 2012, and she hasn’t missed one since. In 2016, she joined a sustainability-focused theme camp, Hotel California. As one of their “Monkeys,” she is involved with most build jobs that involve heights that scare other builders. In her professional life, she is focused on creating positive social and environmental impact. As a mother and someone who often metaphorically holds space for others, Ela was moved by the idea of creating a vessel that can physically hold space for thousands of people and hopefully help them feel loved and accepted.

Ela says, “In bringing this Temple to the playa, we want to experiment with how much of our hearts we can insert into Her in the next eight months. This is going to be a beautiful process and hopefully a life-changing experience for those who get involved.”

Reed Finlay is the Co-lead behind the Temple. Residing in Ojai, California, Reed is a designer of spaces for spiritual health and transformation. He was inspired to co-create Temple of the Heart with Ela after hearing about her vision of bringing a feminine Temple to Black Rock City and seeing her early sketches. What followed was a powerful collaboration: Reed’s expertise in temple design and sustainability led to a structure that is not just beautiful and powerful but also buildable, ecological, and safe.

“The Burning Man Temple is the most remarkable place for deep sharing, grieving and celebration,” Reed says, “and we feel a great responsibility to provide a space that respects those profound experiences.”

Ela has already assembled a team of highly skilled builders with extensive experience in building previous Temples. Tree J, one of the most experienced woodworkers in Burning Man’s artist community and a founder of the Temple Builders Guild, is the Build Lead for the Temple of the Heart. Nonstop Symon is the LNT Lead and Ajesh Shah will be the Volunteer Coordinator. Others who have committed to supporting the project include Steve Brummond, 2017 Temple co-artist and architect, and many other skilled builders with experience in Black Rock City. Finally, Ela’s crew from Hotel California is committed to supporting all stages of the project and are donating camp resources and their custom solar infrastructure to the Temple.

Building the Black Rock City Temple takes a vast community of individuals who are dedicated to creating a space for thousands of participants to have meaningful experiences.

Do you think you want to be on the Temple Crew? Ela and Reed welcome experienced builders as well as those looking to learn. If you would like to help, please fill out the form linked on Temple of the Heart’s website.

Another key way in which the Temple Crew plans to involve the community is through the flowers incorporated into the design. They are looking for contributors to send their wooden flowers, which will be added to the composition in the Rose Altar and used to decorate the gates. With these flowers, contributors may also send a letter or photograph to be added to the Temple offerings.

The Temple Grant only covers a portion of the total expenses. The Temple belongs to all of us, and it takes many donations, large or small, to help it become a reality. You are invited to donate now through the Temple of the Heart website, or look for the Kickstarter campaign scheduled to launch in mid-February.

About the author: Katie Hazard and spec 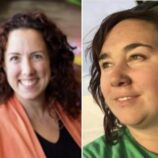 Katie Hazard (yes that’s her real last name) is the Associate Director of Art Management for Burning Man. She leads the selection, placement, and installation of over 400 artworks annually in Black Rock City and beyond. She’s been passionate about arts administration and grants management for many years; she has a degree in Art History from the University of Notre Dame, worked at the Art Institute of Chicago, and spent 10 years at Harvard University as a Senior Grants Manager. Katie’s first year on playa was 2000, and she volunteered for 10 years (DMV, Man Base Lighting, art build crews, theme camp organization, Fire Conclave) before joining the staff in 2013. Katie is also a certified yoga teacher and has been a practitioner of Buddhist meditation for more than a decade. | Spec is an Art Management Specialist with Burning Man Project's Art team. In this role, she administers the Honoraria and Temple grant programs, acts as a liaison for selected art projects, manages the ARTerians, and does placement for all art projects. Her superpower is the ability to work through the inherent conflict between the creative process, while executing the organization and strategy required to complete a project.

33 Comments on “Introducing Your 2023 Temple: Temple of the Heart”