Work began today almost wordlessly. Everyone on this year’s KCrew is a veteran Man builder, and by now well familiar with the steps involved. The Greenlees – refrigerator-sized metal toolboxes – were unpacked yesterday, and the myriad tools of Man-building now stand ready, awaiting our use. Sawhorses are unpacked and assembled: two for the torso and two for each leg. (The arm horses will follow later.) The lumber that will become the Man has already been delivered and now, three long timbers are carried from it and placed across each pair of sawhorses. These beams will form the Man’s spine, and the long bones of the legs. A measurement is made, doublechecked, and once again Otto Von Danger makes the traditional first cut, lopping some 14″ from the base of the Man’s spine. From here, the Crew quickly split up to tackle their first major task: cutting and shaping all of the pieces needed to build the Burning Man. 4×4’s are ripped (cut lengthwise) on a table saw to create 2×2’s. These are then miter cut to length to become crossbeams, the horizontal spars that support the Man’s leg and arm rings, as well as the ribs in his torso. The Man needs a lot of crossbeams. Monkeyboy puts his opposable thumbs to good use

The rings and the ribs also need to be cut, a more elaborate task due to their curvature. For these, plywood sheet stock is used, upon which the ring and rib shapes are scribed by pencil, and then cut by hand with jigsaws. For the next several days, the workshop will literally be abuzz with activity, the whines of tool motors a near-constant accompaniment to our labors. It’s around this time that it begins to appear as if we’re not building a Man at all; rather, it would seem that sawdust is our major product. Sawdust and noise.

They say that one enters this world naked, and screaming. This is true for the Man as well. 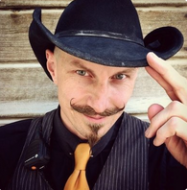 3 Comments on “Opening Muladhara with a Sawzall”