I just have to share a major feel-good story to juice you as you pack and make your way to That Thing in the Desert (or wherever you’re headed during Burn Week).

As some of you may know, Erin Douglas, founder of the Black Burner Project, received an Honorarium to build a major art installation depicting Black people at Burning Man experiencing BLACK JOY. It is called “BLACK! ASÉ” (ah-shay), which in Yoruba means “the power to make things happen through your actions and intentions.”

This will be a brain-breaking, trailblazing piece depicting BLACK JOY in a way you have never witnessed — if the reactions of everyone who has witnessed its build are any indication.

To learn more about Erin and how she has diligently been widening the path for people of color to come to Black Rock City, make sure to follow her Instagram account. Erin is single-handedly working to attract and then acculturate her followers (nearly 10,000 now), on all the questions a newbie Burner would have, including how to get a ticket, where to find a camp, what the Principles are, and if they will be welcome and safe in Black Rock City.

With “BLACK! ASÉ,” Erin and her crew are not only sending a bold, not-to-be-missed message with the enormity of the 30’ tall photographs of Black Burners in the open playa, but the supporting structure itself is also designed to provide a welcoming space for people of color and their allies to gather for talks, teas, toasts, healing ceremonies and dances. The scaffolding upholding the big images will invite people to climb up inside, find a perch to hang out on, and create an overall environment that facilitates interactions of all sorts.

The importance of this project is obvious, but especially so when you witness how many legendary Burning Man artists and established theme camps have come out from all corners to support this Herculean effort.

This weekend, while artists were bending metal and welding at Marco Cochrane’s warehouse in Petaluma, California, another local Burning Man artist Michael Garlington swung by and sat down to give Erin some pertinent advice. As one of the first artists to incorporate photography into a Black Rock City sculpture, Michael has been offering Erin guidance all along the way regarding lighting, decor, and when to shellac the whole thing to avoid incorporating the dust. Huge.

Marco and crew members Big Red and Jared have been diligently jumping between working on his massive piece, “GAIA,” and supporting “BLACK! ASÉ” volunteers.

Just now, David Best came through the studio to meet Erin and build lead Kyle Mimms, check out the massive pieces being welded together, and also offer his fatherly advice about what happens when you work on a giant installation that will clearly impact all who see it: “It’s gonna change you, in a good way,” David said to Erin as he left the building, his blue eyes twinkling.

It’s not only local artists who are coming forward. The leads of major theme camps and certain skilled individuals are also contributing in significant ways. Shout out to Square One Camp for helping to raise money, and for sending a huge check at a critical time. And props to House of Yes for hosting another event to raise awareness and money for the project. We just got confirmation that Robot Heart will roll up on the bus to DJ one of the events that will be held later in the week at the installation — no doubt this will bring the vibe up high. Airpusher Collective is also organizing an army of mutant vehicles built by BIPOC and LGBTQIA+ creators for the opening ceremony of “BLACK! ASÉ,” which will happen Tuesday night, August 30.

“BLACK! ASÉ” is still fundraising! The team needs to close the budget gap to the tune of about $50K. If you are reading this, please consider donating to their GoFundMe. “BLACK! ASÉ” is fiscally sponsored by IDEATE, a nonprofit organization, so every penny is tax deductible.

Both members of the We Are From Dust team, Yomi Ayeni and myself, have dedicated our time, money, and connections gained from burning for more than two decades to support “BLACK! ASÉ.” Our work really begins once this piece is on the playa, to find its second home (and hopefully third).

Any jaded-fuck attitudes I had in years past have been totally replaced by pure inspiration and unbridled excitement for Erin and how impactful this art piece will be. When you see it, I hope you’ll feel the same.

About the author: Evil Pippi 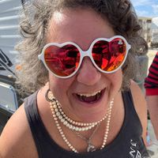 Candace Locklear (aka Evil Pippi) helped form the Arts non-profit We Are From Dust (WAFD) with founder Yomi Ayeni, both former Media Mecca volunteers. WAFD is dedicating its time and resources to supporting "BLACK! ASÉ" by fundraising, volunteer coordination, schwag creation, and the build. Evil Pippi has been attending Burning Man on and off since 1996, and has remained deeply connected to the staff and various organizations within the Burning Man community. She has been known to perform as both a Santa and a Klown—in the dust and the default world.