Thankfully, it has happened again. The Golden Spike has been sledgehammered into the ground, marking the spot where the Man will be built and then later burned. And we mean thankfully quite literally, as person after person in the Spike circle expressed gratitude for their ability to be here again. They gave specific thanks to the patrons who donated to the organization to keep it alive for the three years between events. And because it has been three long years since the last Golden Spike ceremony, change and gratitude were the two dominant themes of the remarks people made as they swung the hammer and drove the spike into the dust.

When it was his turn, Burning Man co-founder Will Roger held the sledge above his head and shouted, “Let’s make this the best Burning Man ever!” And of course that’s the best way to approach this (and every year), because who knows what the future will bring. This could be the last year that Burning Man is able to have an event, or it could be the last year that you get to go, so you better make it the best. We hate to be so fatalistic but I suffered a pretty severe stroke in January of this year and it has given me a whole new perspective on the fragility of existence and the fragility of our world, so bear with me as I bring this perspective into my observations this year.

In some ways, the Spike ceremony has become very, very familiar to everyone who is involved with it. The Spike, as you probably know, marks the very spot upon which the Man will be erected and then later burned, and it marks the geographic center of Black Rock City, around which the avenues and streets will be laid out. It also marks the beginning of the Burning Man season and it, like so many things that have sprung up around the event itself, has become layered in ritual and ceremony.

On this day when it is 104°F+ in Gerlach, you wonder once again what possessed the early organizers of Burning Man to choose this godforsaken spot as the site of the event, and why they would pick the hottest part of the day to have the Spike ceremony. You get an early taste of how ungodly hot everything can be in the desert from your very first day. In addition, you are now at 4,000-ft. altitude, and you are feeling those effects as well. Because you’re in the high desert, it could not only be incredibly hot in the daytime, but it could also get incredibly cold at night. It could also be windy and sandblasted, as it has been in the past. The sky can be a brilliant gorgeous blue or it could be shaded red by the smoke from multiple fires in California. This year, it seems the grip of climate change has tightened its bony fingers around the globe’s fragile neck. What isn’t burning or baking is under water from record floods.

So you have to be prepared for everything because anything can happen, and it usually does. Howling winds and unrelenting heat and sun. You have to bring your own ‘everything’ to survive here—shade food, water, everything—because there is no escaping the sun on the barren playa. Have I mentioned that it could be warm?

Of course, the Spike ceremony didn’t start out this big, and Will Roger remembers when it was just a handful of people. “In 1999, we had to move the city site three times as I negotiated with the BLM to get out of the mud. So three Golden Spikes that year, the third one was just me and Tony! Back then it was just a few of us—Tony, Rod, Flynn, and I were the main players.” 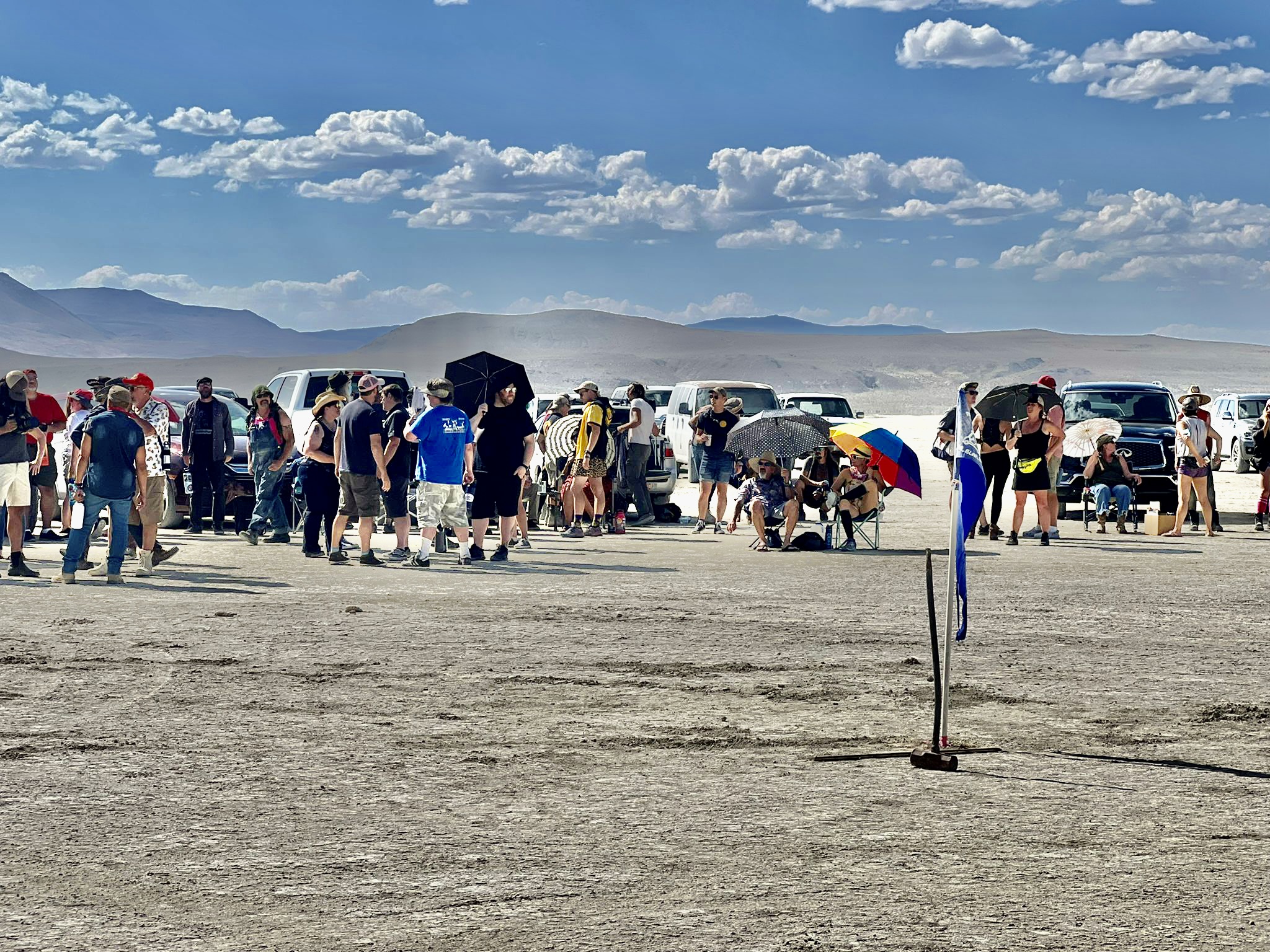 People often look at the extravagant and beautiful art that is found at Burning Man, and they ask, “Why do you burn it?” That gets to the root of the event itself—Burning Man is a celebration, or an acknowledgment if you will, of the temporal nature of our existence. Temporality—that we are on this earth for a short, short time, and all that we are and all that we hold dear will someday die with us. But now, paradoxically, Burning Man has become something of a permanent cultural institution. After 30 years of existence, many of the things that need to happen to create the event have become wrapped in ritual and ceremony, just as it is with the Golden Spike. This has been going on since the event moved from San Francisco to the Black Rock Desert in 1990, and now the Renwick Gallery of the Smithsonian American Art Museum had on display a Golden Spike that has been used in the desert to mark the beginning of the Burning Man season (as part of their No Spectators exhibition in 2018).

We can reliably tell you that there were many, many smiles among the 150 or so people who were gathered for the ceremony last Thursday, because it had been three long years since the last Spike ceremony took place, due to the COVID pandemic. People were gathering again. People who were full of gratitude because they were just plain happy to be able to do this again and to see each other. There isn’t anyone who hasn’t been touched by the last three years of the pandemic, everyone has gone through changes and now we are back in the place that looks like it never changes (even though in glacial terms it absolutely does, but for hundreds of years it has looked the same way as look it looks right now). All of us gathered here are different than the people who left three years ago, but the land we have returned to has not changed, and maybe there is solace in that, maybe there is comfort. I know I found it to be so.

Suddenly, everything seems familiar again. From the heat, to the people, to the dust, to the joy. We know how to do this. The event seems somehow permanently etched in our consciousness and the crew on playa is ready to go. Each person in turn takes a swing with a sledgehammer to drive the stake a little further into the ground, and with each swing words are shared with the gathered group. There is a great deal of personal investment in this simple action. People take it very seriously and make thoughtful comments. Burning Man Project CEO Marian Goodell relayed what Pyramid Lake Paiute Tribe elders, who were also in the circle, had observed about the ceremony—that it all starts out from circles. “We start with that Spike and then we do the survey and the survey is done in circles and then the fence and then we take it away. We go in reverse. That’s a very powerful way to honor process of life and the ritual of coming together.”

Crimson Rose seemed to pick up how important this gathering was for each of the people who were there when she said, “The fire that will consume this area comes from each and every one of you. Let’s be beautiful and make beautiful things and then burn them down.”

The ceremony came to an end when Coyote smashed a bottle of champagne onto the Spike, that was now plunged into the desert floor and the glass shattered everywhere. From all points around the circle, celebrants came running out to pick up each and every last shard, and a familiar chant of “Leave No Trace!” went up amongst the entire group.

…and that is how Black Rock City 2022 was started.

The survey crew started work that very moment. We are not able to stay for survey this year, but we will return in a few weeks. See you in the dust. All photos courtesy of John Curley

35 Comments on “Once More Unto Dust”